General information
National Parks all over the world have to be well taken care of to avoid threats becoming dangers, putting the whole ecosystem of the park at risk. Most such threats are caused by humans cutting trees and plants, hunting animals, bringing non-native species to regions where they shouldn’t be or growing plantations within the boundaries of protected areas. All of this holds true for Khao Sok National Park as well. Tourism can be a part of the solution, but also a part of the problem, if visitors are not considerate of the stunning nature surrounding them. 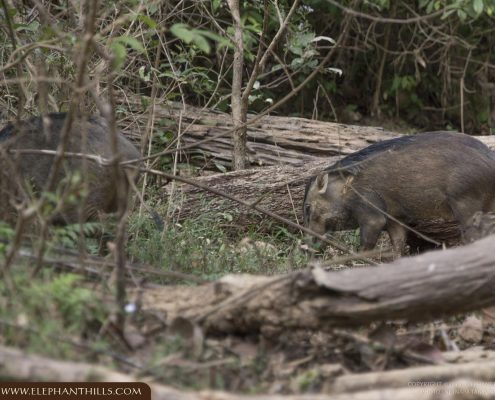 In 1989, illegal logging was banned by law in Thailand. An aerial photographic survey of Thailand, conducted in 1961, showed forests to cover about 54 percent of the country. By 2005 this figure had dropped to 28.4 percent (145,200 km2), primary forest accounted for 44.4 percent (64,510km2) of this. The annual loss of forest habitats between 2000 and 2005 was 588 km2 per year, or a 0.4 percent decrease per annum, which is slightly lower than the rates of loss occurring before the logging ban in 1989 (about 0.6% pa).
Despite the logging ban between 1990 and 2005 Thailand still lost about 9 percent of its forest cover, about 14,000 km2. Investigations have shown that trees are felled in Thailand and smuggled into Burma to be exported as Burmese logs or processed logs (30 percent of Salawin National Park, Mae Hong Son province, was logged between 1997 and 1998). The industry is controlled by timber barons who can have strong ties to politicians and the military. In remote areas forestry officials have difficulty enforcing the logging ban due to armed gangs hired by illegal timber operators. Additionally, villagers in some parts of Thailand have come to rely on logging as their primary source of income.

Between 1990 and 2005 some 4,600 km2 of plantations were established in Thailand. With an overall area of 30,990 km2, plantations accounted for 21.3 percent of total forest cover in Thailand in 2005. Since plantations can be considered within the definition of forest cover, it can be difficult to establish how much natural habitat loss has really occurred. Plantations such as rubber have an economic utility for about 35 years, after which they are felled and replanted. It is quite easy at this stage to illegally expand the plantation boundaries into the natural environment.

The rainforest is very good at reducing soil erosion to an absolute minimum. Since only very little direct sunlight reaches the ground, soils rarely dry to fine dust. The dense canopy cover also means rain drops hitting the ground do so from a very short distance above the ground (from a few meters to a few centimeters). Without this cover, the raindrops are falling from several thousand meters onto the ground and have much more erosive energy.

A report in 2007 established that the National Parks in Thailand could support a population of 2000 wild tigers, three times the current number. Tigers are mostly under threat due to habitat loss and poachers who sell their skin and body parts to booming medicinal and souvenir markets, mostly in China. Part of the problem is that the authorities refuse to put tiger traffickers into prison, choosing to impose small fines instead. The maximum punishment is a three-year jail term and a fine of 40,000 Thai Baht (US$1,000), but convictions from the 50-100 arrests each year generally result in fines of only 2,000 baht (US$50). The World Wildlife Fund estimates illegal trading in endangered animals is worth about 200 million baht (US$5 million) a year. Ivory comprises about 85 percent of the trade, followed by crocodile and tiger parts.

According to official statistics, currently around 140,000 visitors explore Khao Sok every year – compared to 82,020 people who visited Khao Sok National Park in 2007! The carrying capacity for the park is not known yet. This means if the number of visitors increases too much, there is a danger that the wildlife will be driven away. Visitors are of course welcome, in fact vital, since park fees go towards the maintenance and protection of the area. 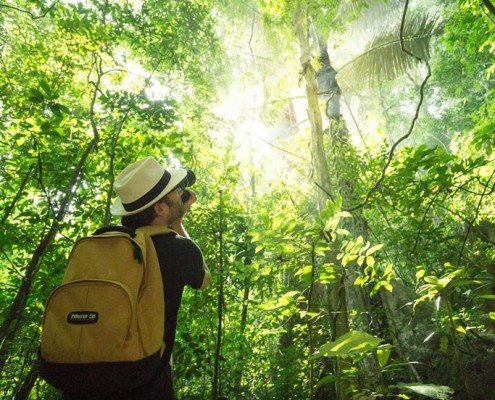 By following these simple rules we can all enjoy Khao Sok National Park whilst ensuring its survival for future generations. Please be considerate and respect the beautiful nature in this area and the local culture and traditions.

Do not drop any litter whilst on trails or along Khao Sok’s roads. Plastic bottles and food bags are a major problem along with cigarette ends and polystyrene packaging. Take all of your rubbish with you when you leave.

Please practice considerate behavior when walking trails. There are no toilets in the forest so please bury your waste and burn all tissue. Any sanitary pads or tampons must be removed from the park. Never go to the toilet near a water course. This can pollute and contaminate the pristine water supply in the area.
Never cut down wood for fire making. You must find the wood you need from dead branches already on the floor. Once you have finished with your fire please leave the area as if no-one had been there. Never leave half burnt plastic or cans on the floor, animals can be seriously harmed by this. Take all rubbish with you and make sure the fire is completely out.

Never attempt to catch or chase any wildlife. Firstly, these are wild animals and you may get hurt, and secondly it creates unnecessary stress for the animals and decreases their energy levels which they need to find food and to mate. If you notice anyone catching or disturbing wildlife, collecting seeds or cutting down trees please report it to the National Park Headquarters immediately (Tel.: +66 (0) 7739 5154).

When bathing in the rivers or at waterfalls please cover up. Thai culture is very different to western culture and swimming nude causes offence.
Do not leave trails and never drive a motorbike or car down along them. The erosion caused by this is extremely damaging and the noise will scare the surrounding wildlife. 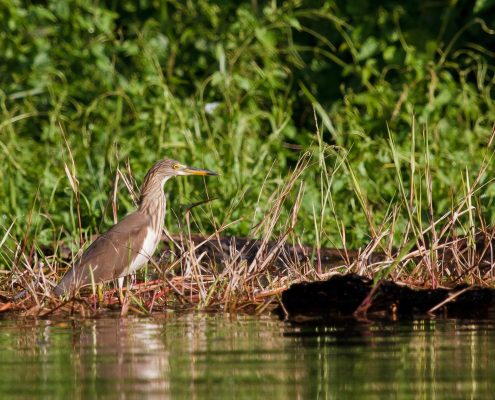 General information
Protecting and conserving natural areas is not always as easy as it sounds. Establishing national parks is a beginning, but laws must be enforced and the population needs to be educated in order to really help the environment.

Current actions for Conservation
There are a number of actions that can be taken and are currently being taken to help protect Khao Sok National Park.

Rangers
Well-trained and highly specialized rangers are patrolling Khao Sok National Park. These rangers have the knowledge and equipment to protect the area. And, most importantly, they understand the importance of conservation, restlessly teaching them to visitors as well as to local people.

Volunteer organizations
A number of organizations are working voluntarily to help endangered species in Thailand and in Khao Sok. 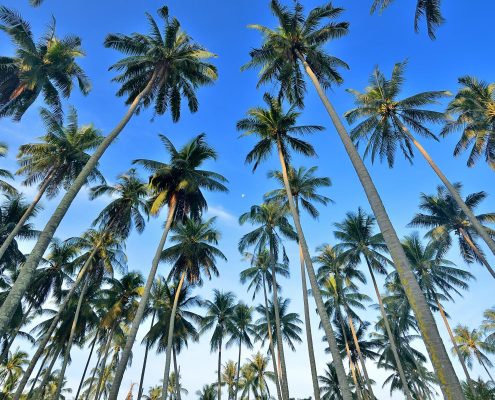 Education
More people have begun to understand the importance of an intact ecosystem through efforts of countless people teaching and showing them. There certainly is still a long way to go, but, as we all know, every journey starts with a first step. If you would like to contribute to this important part of conservation, please have a look at the Khao Sok Children’s Project.

Punishment
The punishment for illegal logging has been increased. Imprisonment awaits illegal loggers. Officials illegally allowing logging in the areas they are responsible for are sentenced as well.

Eco Tourism
The year 2002 was “The Year of Ecotourism” in Thailand. This directed a much-needed focus on nature tours in Thailand and spread knowledge among people, encouraging them to control and carry out tourism more sustainable.

The IUCN Red List
The International Union for Conservation of Nature (IUCN) is the world’s oldest and largest global network of Environmental networks, combining over 1000 governments and NGOs (Non-Government Organisations) from over 160 countries. It seeks to form solutions to the environmental issues faced by the human race and the planet.
The IUCN Red List was created in 1963 and is designed to highlight the extinction risk of flora and fauna around the world, arranged into several categories:

There are currently 41,415 species enlisted on the Red List, with 16,306 of them considered near extinction.

What is CITES?
The Convention on International Trade in Endangered Species of Wild Fauna and Flora (CITES) was also formed in 1963, during an IUCN meeting between 80 countries (now 181 countries take part in the convention). The agreement is voluntary, and only legally binding to parties who have formally agreed to it. There was an amendment in 1979, which came into effect in 1987. A second amendment was created as early as 1983, but only recently became effective when 100 member countries signed it in Gaborone (Botswana) in 2013. Thailand agreed and ratified to the original convention in 1983.

The agreement encompasses some 33,000 species of animals and plants in three Appendixes.

Appendix I: This list includes some 800 species that are endangered and all trade in these species is prohibited, except under exceptional circumstances. Trade of captive bred animals or cultivated plants of Appendix I species are considered Appendix II specimens.

Appendix II: This list includes some 32,500 species which may become endangered if trade in the species is not strictly regulated. The agreement requires the issuing of export permits, but does not cover import restrictions.

Appendix III: This list includes some 170 species which member countries have requested other party’s aid in monitoring and protecting. The species are not necessarily in danger of extinction, but require regulation for other reasons. The agreement requires the issuing of export permits, and a certificate of origin.