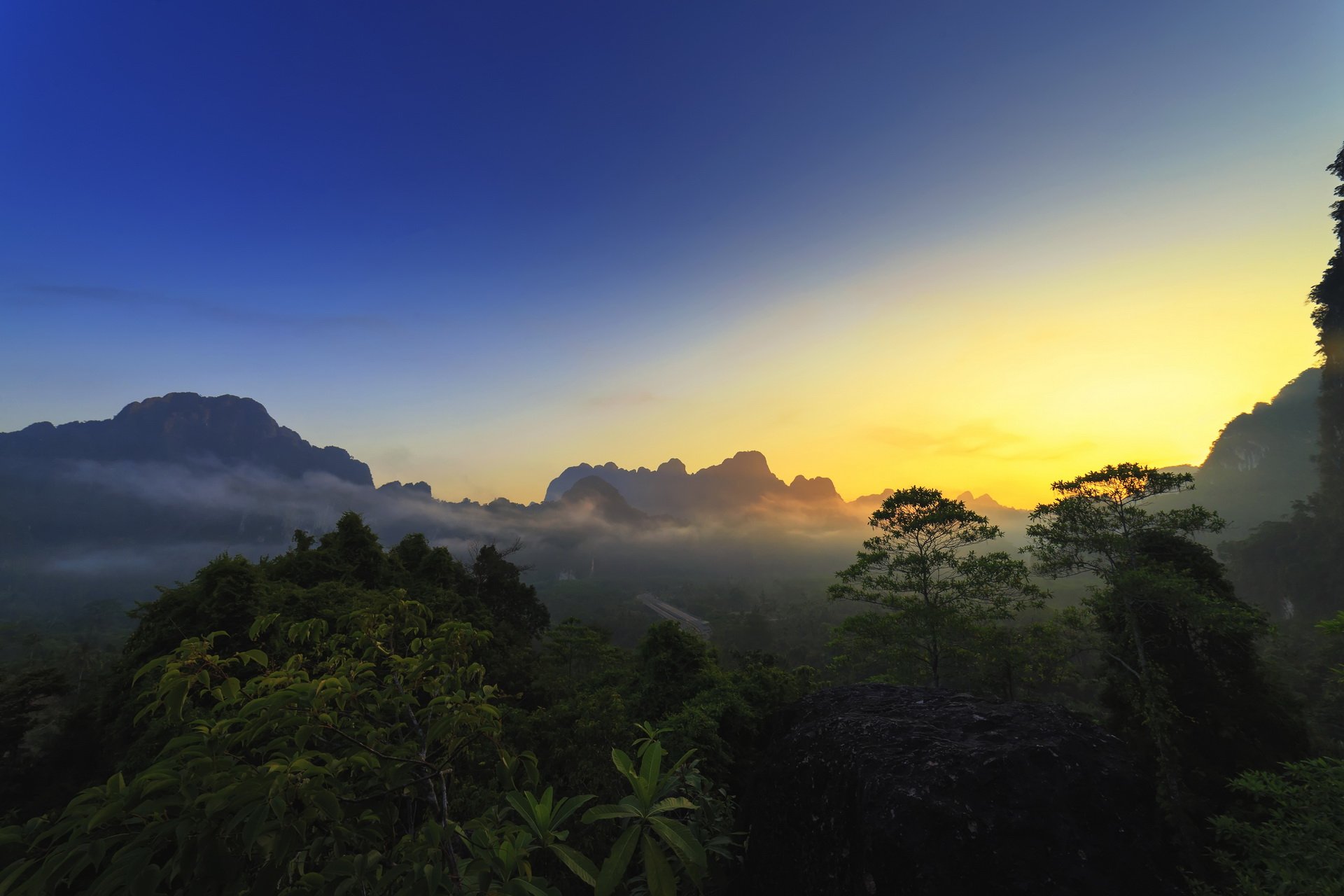 Khao Sok National Park was established in 1980 as Thailand’s 22nd national park. Located in Southern Thailand, Khao Sok is in the middle of the country’s Southern landmass and is only a few hours north of Phuket. The park consists of a thick native rainforest, waterfalls, majestic limestone cliffs and an island stubbed lake.

Due to its fascinating history, this National Park still has many secrets hidden in its deep forests yet to uncover. Take a closer look at some of our lesser-known facts about Khao Sok!

The park extends into parts of the Khlong Yee and Khlong Pra Sang forests, as well as portions of the Krai Son and the Khao Pung areas in the Ban Ta Khun district and the Khlong Sok and Panom areas in the province of Surat Thani.

Southern Thailand has a number of wonderful national parks and Khao Sok is also bordered by three others: Kaeng Krueng (541 km2) Sri Phang Nga (246 km2) and Khlong Phanom (410 km2). Together with the adjacent wildlife sanctuaries in Khlong Saeng, Khlong Yan and Khlong Naka, the combined area is over 3,500 square kilometres, making it an area more than half the size of Bali!

This sprawling area of natural resource is not just a phenomenal area of climate-supporting rainforest, it’s also incredibly biodiverse, being home to a vast number of plants and animals. It’s of the utmost importance that we protect this area for the sake of both the environment and our future. 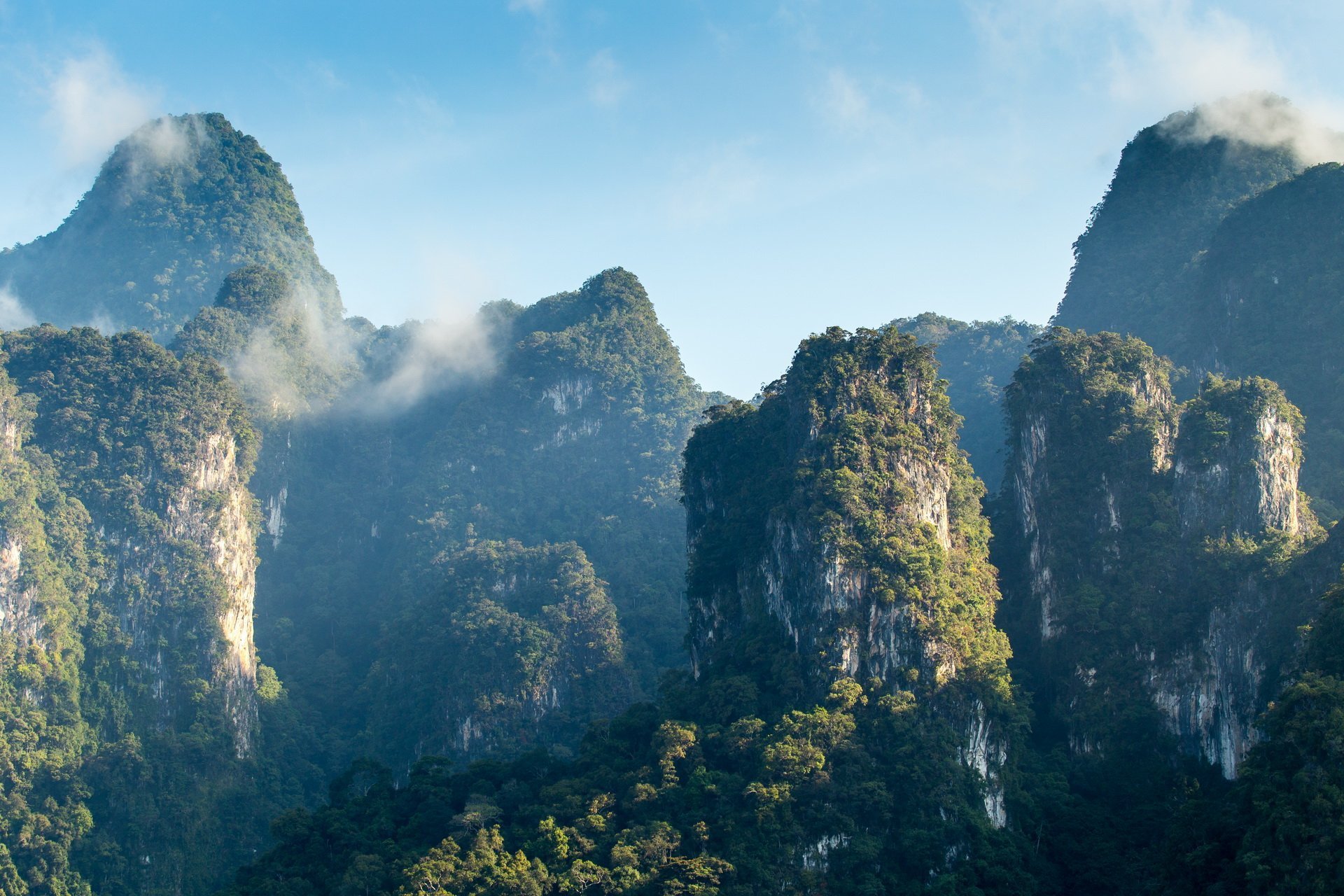 The area in which Khao Sok sits was sculpted during the same tectonic shift that created the Himalayan mountains. Famous for the limestone or ‘karst’ mountains which loom dramatically over the lake, the terrain in Khao Sok was pushed upward to form the peaks seen throughout the region and giving Khao Sok its mountainous landscape. In most of the region, the ground level is about 200m above sea level with the average mountain heights around 400m. The tallest peak in the National Park is 960m in height.

In a picturesque scene similar to that found in Halong Bay, Khao Sok National Park boasts a beautiful expanse of water in the form of Cheow Lan Lake. One of our Top 10 Reasons to Visit Khao Sok, stunning Cheow Larn Lake was created in 1982 as part of a damming project to provide hydroelectricity to the south of Thailand. The lake stretches over an area of 165 km2, with great peaks of limestone jutting from its surface.

The entire park is covered in a combination of evergreen rainforest and rich vegetation. Specifically, Khao Sok National Park consists of:

The History of Khao Sok 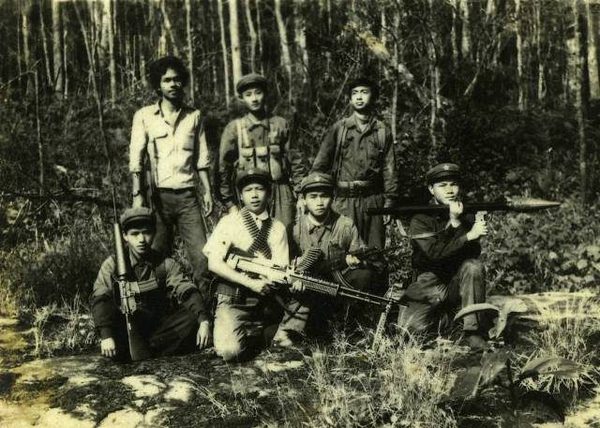 Thai students, who had joined communist insurgency groups, set up a stronghold in Khao Sok

The rainforest in this region is one of the oldest in the world, believed to be even older than the Amazon. Due to Thailand having remained in a similar equatorial position throughout the last 160 million years, the climate has been relatively unaffected by ice ages. While other regions of the planet were suffering severe draughts, the Khao Sok region still received enough rainfall to sustain the forests.

Fast forward to the 1900s and much of Thailand was deforested by mass logging. In a twist of fate for Khao Sok, a group of Thai students who had become communist insurgents evaded the government by setting up a stronghold in Khao Sok. During 1975-1982, while other areas were being rapidly depleted of rainforest, these students, in trying to keep the Thai Army at bay, also obstructed the loggers, miners and hunters.

By the time the students had left Khao Sok, it had been officially established as a National Park. It is now protected from logging under Thai national laws.

There are a number of threats to the long-term sustainability of Khao Sok National Park, both to the area itself and to those who call it home. Sadly, most of the threats are caused by humans, but this does mean that reversing the damage is completely within our control.

The main threats that Khao Sok is contending with are:

However, there are significant efforts being made by a combination of governmental, private and volunteer organisations to protect Khao Sok and ensure its future success.

Rangers patrol the park, educating visitors and local people about how best to protect the environment. Understanding how our actions impact the world around us is a key step in the conservation effort, which is why initiatives in schools such as the Khao Sok Children’s Project are so important. Eco-tourism also plays an important role, ensuring that the many guests who visit Khao Sok National Park every year (whose park fees provide vital funding toward park maintenance) are able to do so sustainably and with minimal negative impact.

Want to know more? You can find plenty of other facts about Khao Sok threats and conservation here.

The Weather and Climate in Khao Sok

An interesting fact about Khao Sok, and many other tropical parts of the world for that matter, is that monthly temperatures don’t vary significantly throughout the year. In fact, the predicted highs and lows over the course of the year in Khao Sok National Park vary less than they do between midday and midnight! 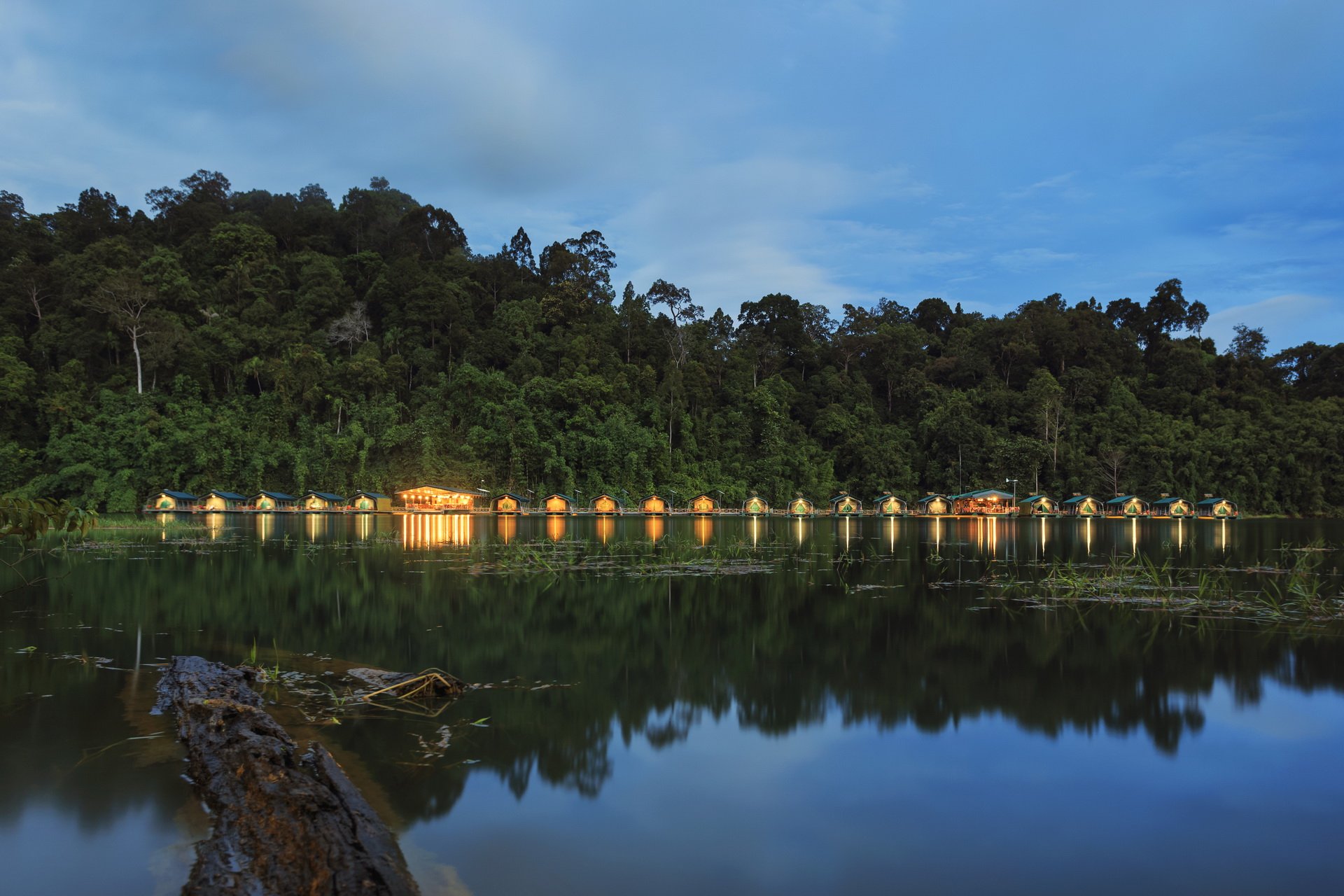 Khao Sok is warm and humid year-round, with an average high of 31 °C and low of 24 °C. Statistically speaking the hottest months are March and April, but with a range of 30-32 °C, there really isn’t much in it!

The level of air moisture in Khao Sok National Park is likely to be much higher than what you’re used to at home, but it makes it all the more easy to appreciate the breeze, shade and frequent showers. Rain provides the main reprieve from humidity as when there’s a downpour it has a cooling effect on the air. As such, the level of humidity during the ‘wet season’ is lower than during the ‘dry season’.

These comfortably warm temperatures make Khao Sok a fantastic destination to visit at any time of the year. 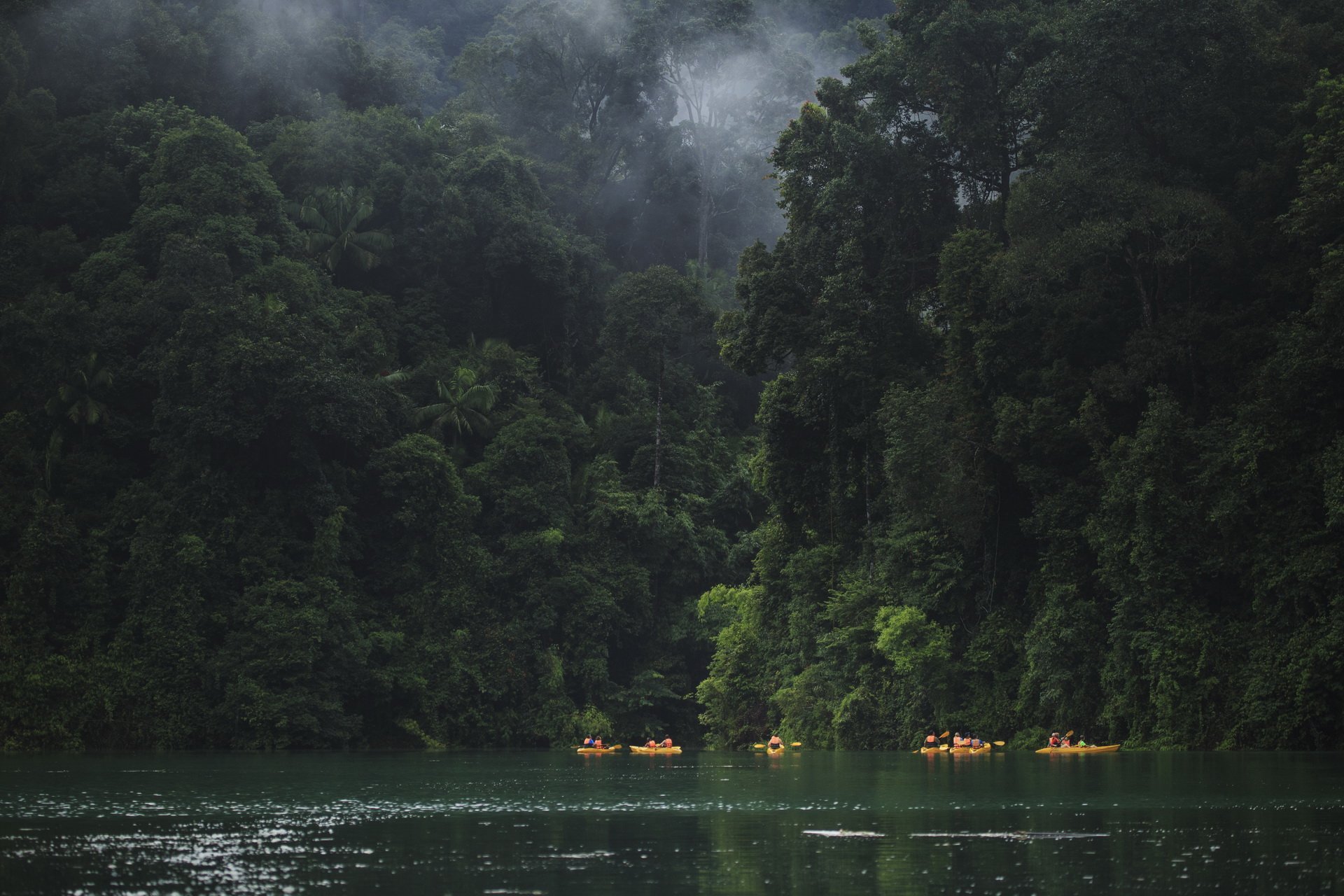 Due to the high mountains and the fact that it is influenced by both the Northeast (Pacific Ocean) and Southwest (Indian Ocean) monsoons, Khao Sok has the highest level of rainfall in Thailand (3,500 mm per year). The wet season lasts from May to November, while the dry season lasts from December to April.

These statistics should be taken with a pinch of salt though, as there’s always a fair chance you’ll get caught in the rain when visiting a rainforest! 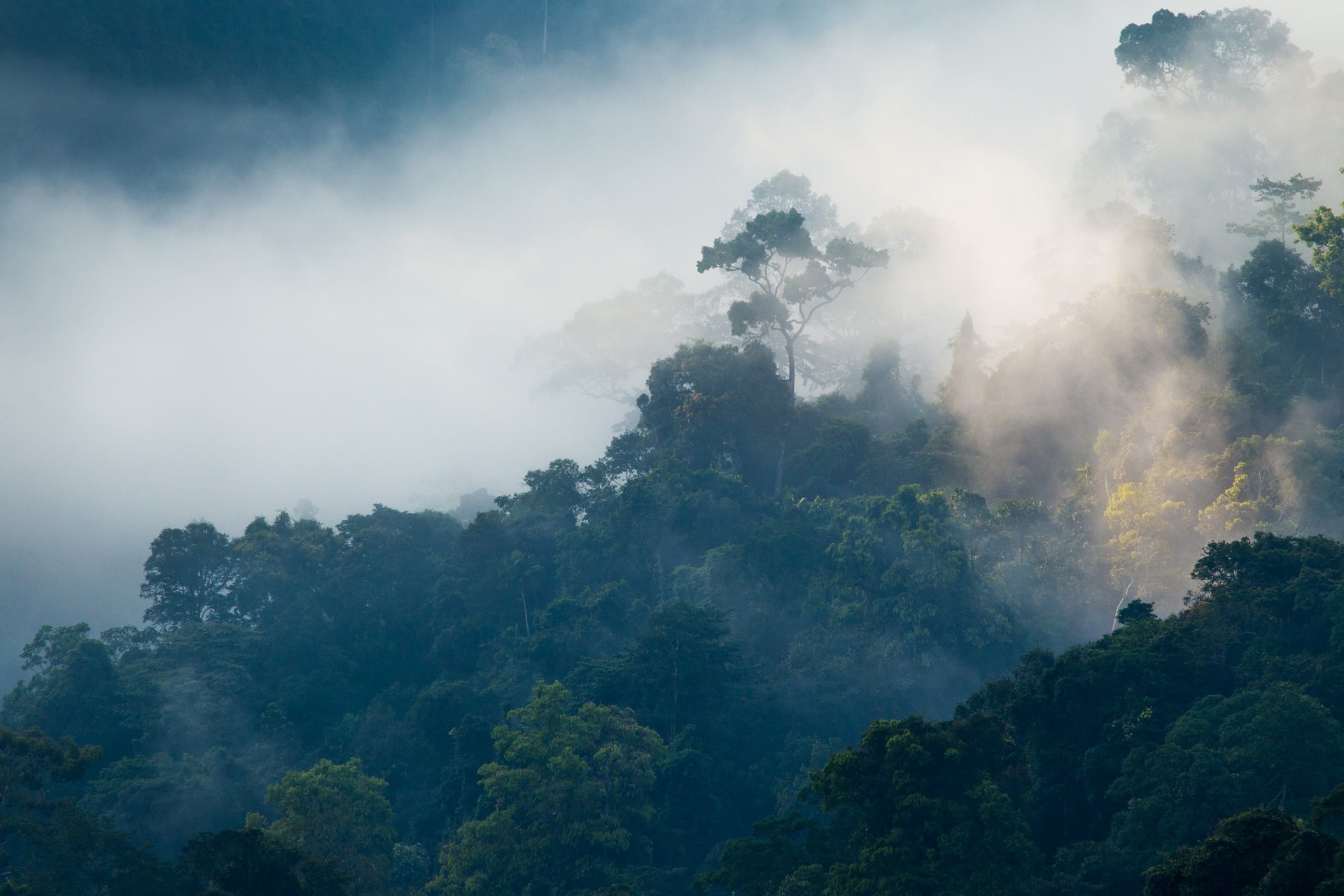 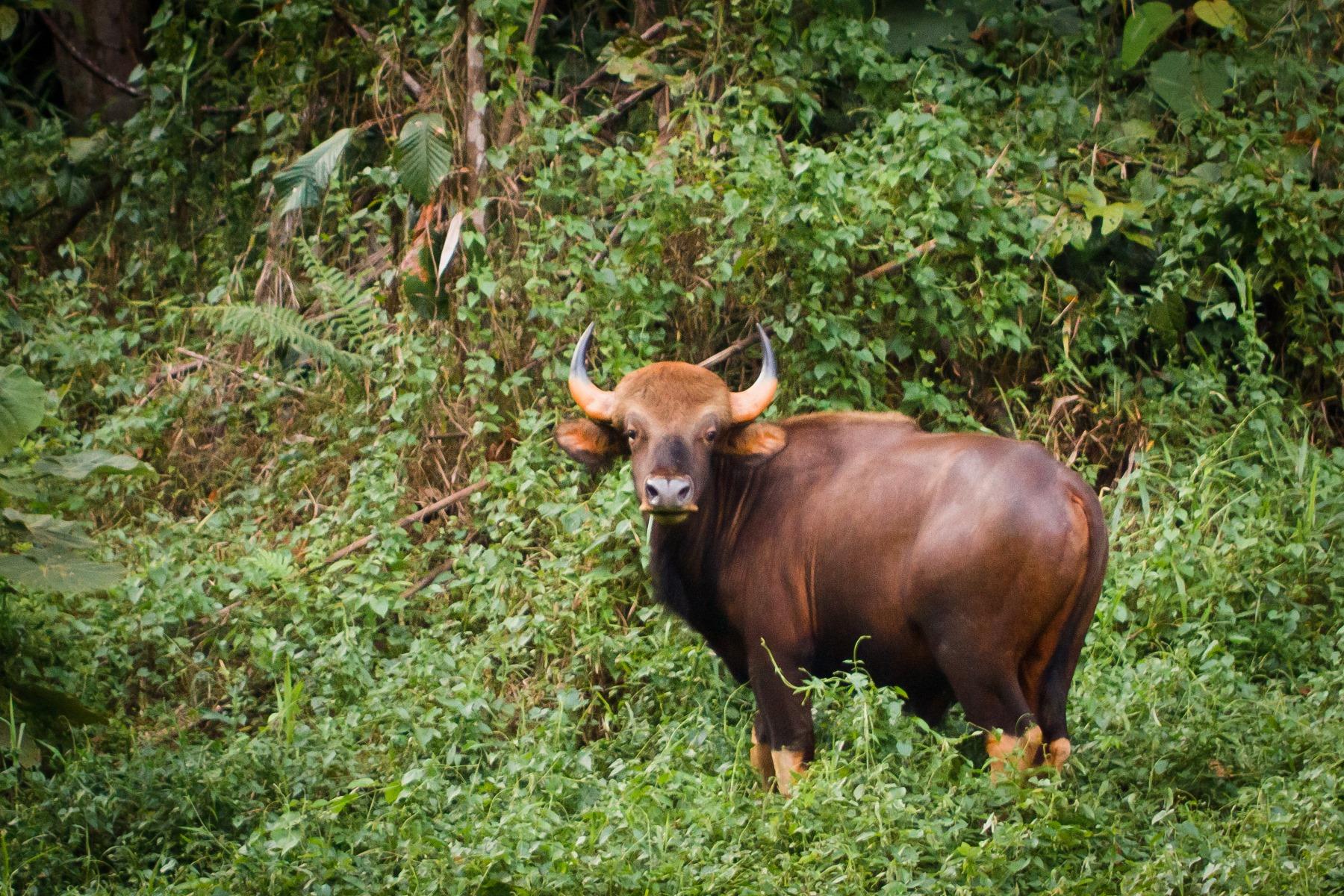 Thailand boasts some of the most biodiverse regions on Earth, and Khao Sok is most definitely one of them. Thanks to it standing relatively unchanged over millions of years, Khao Sok has become a safe-haven for a variety of birds, insects, reptiles and mammals.

While each species that calls our National Park home is incredibly special, there are a few which are particularly interesting.

Here are some fun facts about our Khao Sok residents: 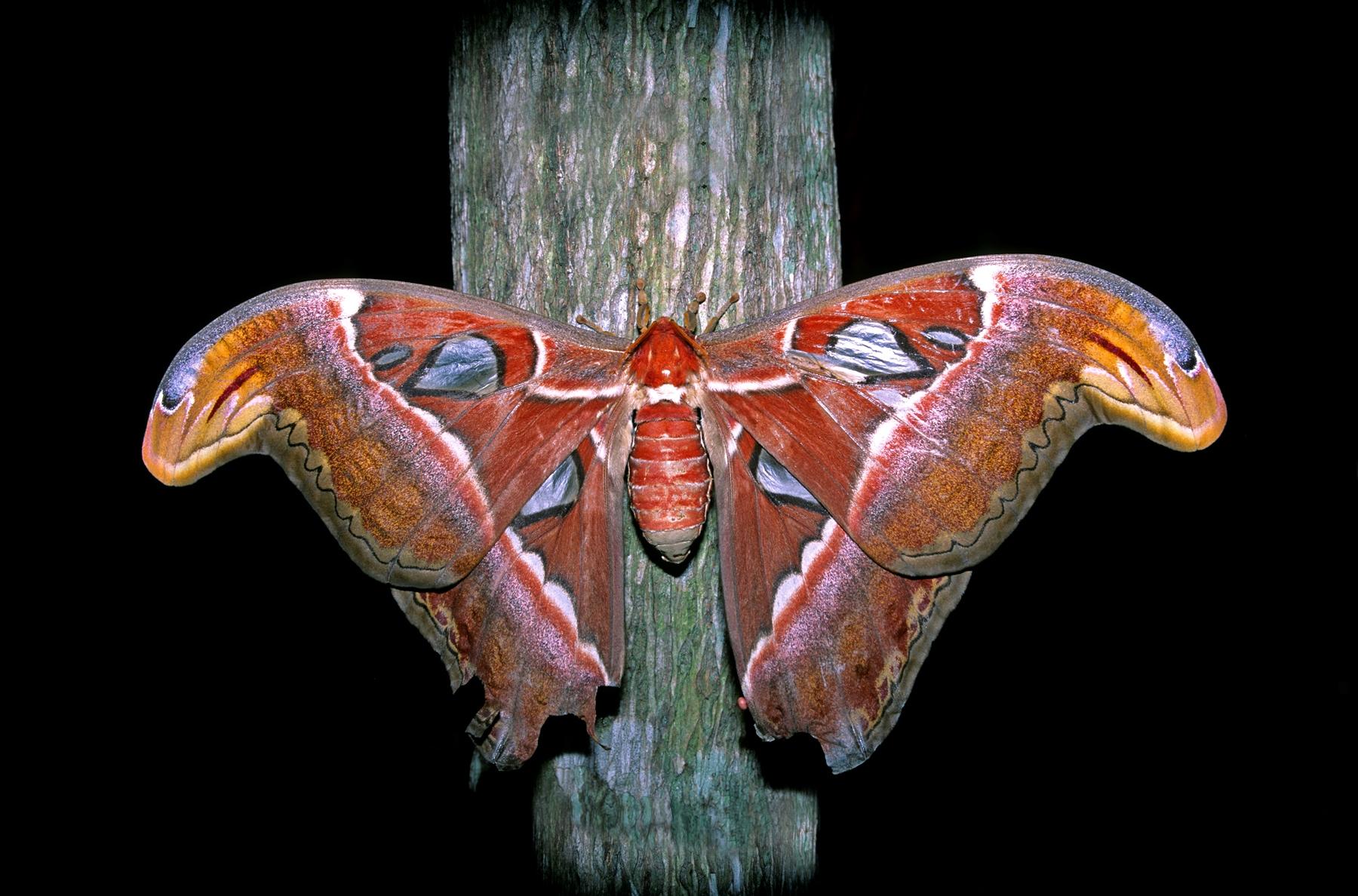 Take a look at our Fauna page. 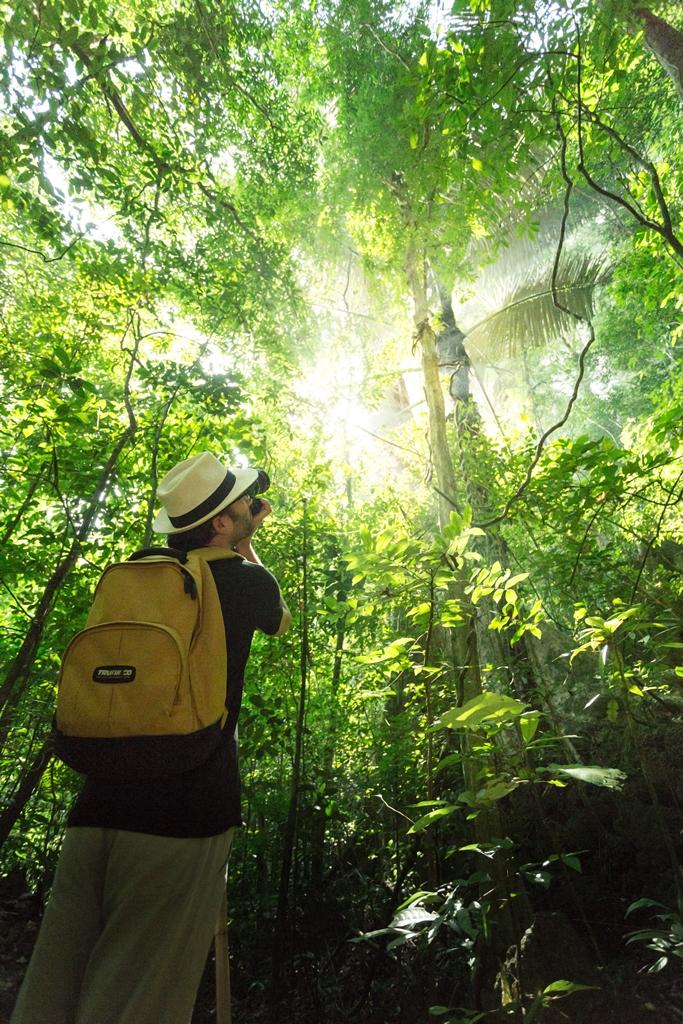 Facts about Khao Sok’s flora, over 200 species of plant in one hectare

With such an expansive area of practically untouched rainforest, it’s no surprise that plantlife is booming in Khao Sok National Park. There are around 200 species of plants per hectare in Khao Sok, with a combination of ginormous trees, trailing vines and exotic flowers.

Fruits such as fig and banana grow in abundance in Khao Sok, providing an ample food source for many animals of the rainforest. You’ll find some of the plants typically associated with South East Asia, such as bamboo and palm trees, but also some unusual plants that are unique to the rainforest.

What to Do in Khao Sok 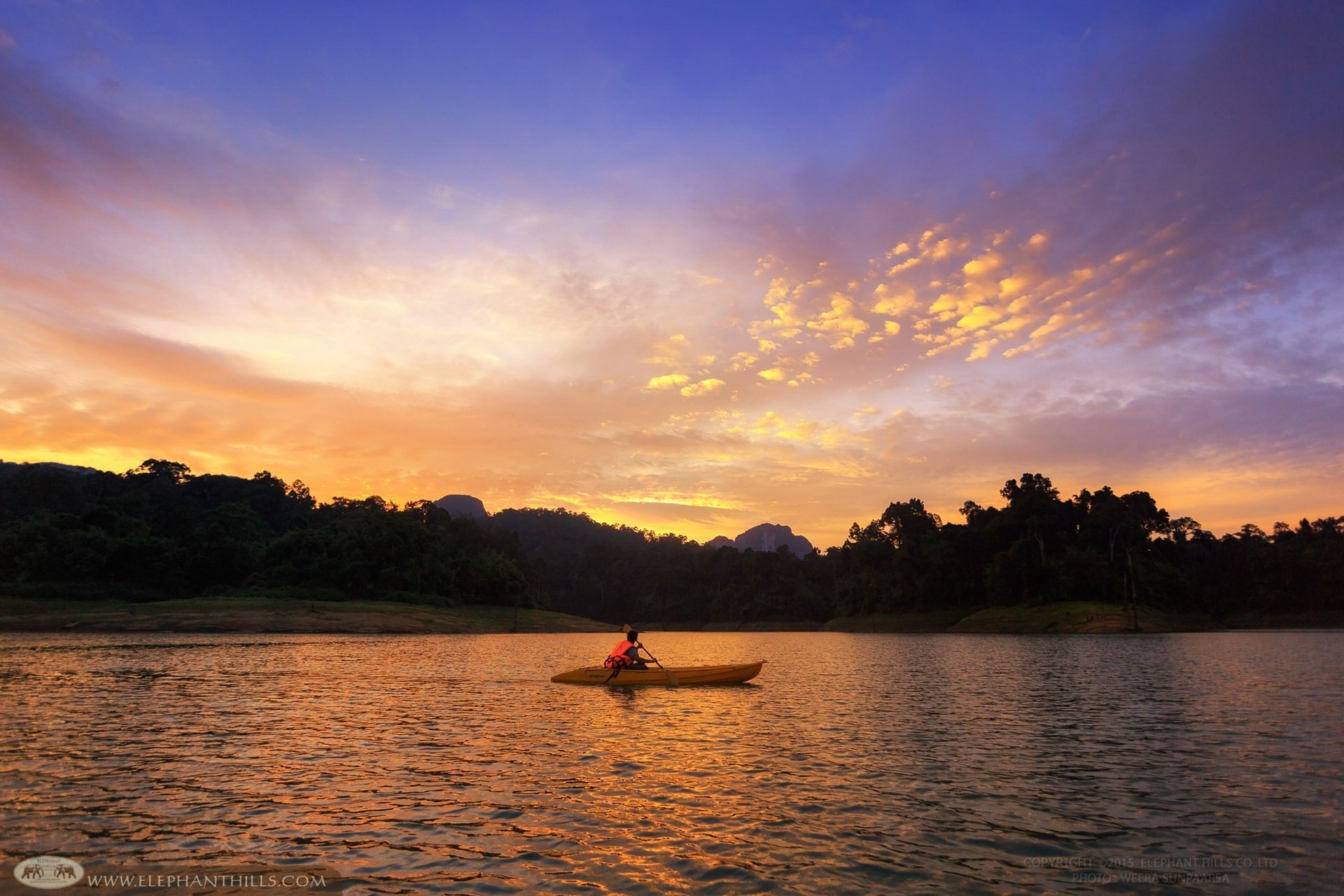 There are a host of activities to take part in during a trip to Khao Sok National Park – you’ll be spoiled for choice!

Trekking through the rainforest is the most popular activity, and something that visitors are free to do on a day-trip after paying the entrance fee. Bring along your binoculars and you’ll also be perfectly located for bird-watching or simply enjoying the view.

To best experience the full range of activities available in Khao Sok National Park, we suggest spending a few days here as part of a tour.

When joining a tour, you’ll have increased opportunities to make the most of what Khao Sok has to offer. As well as trekking through the jungle you can explore Khao Sok via its waterways, venturing into the many channels and the mangrove swamps by canoe or kayak. 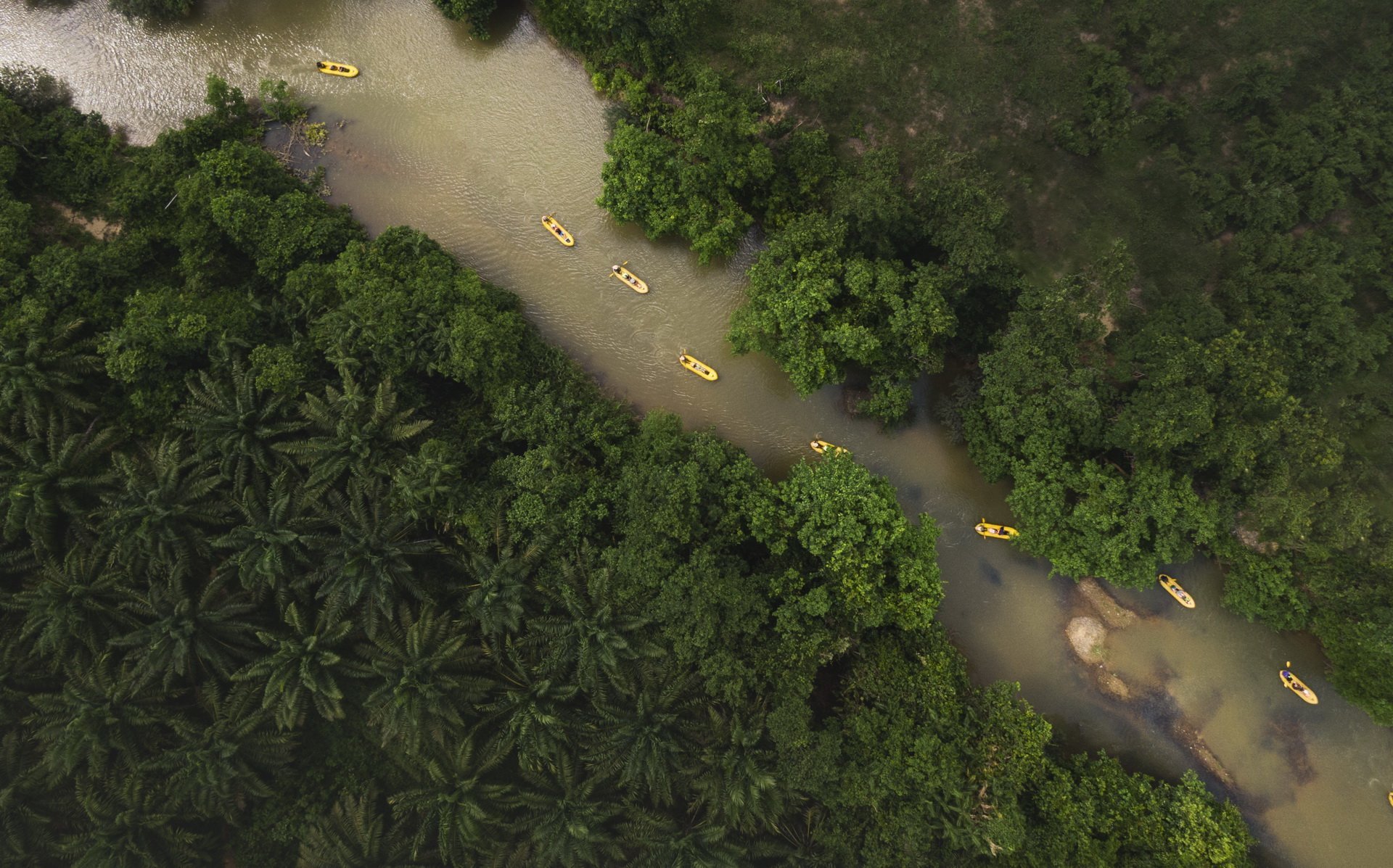 paddling and chilling out at the Sok river

Another water-based activity not to be missed is swimming in the waters of Cheow Larn Lake or gliding across its surface. The views from the lake are breathtaking, so ensure that any trip to Khao Sok includes time at this fantastic location. For a truly unique experience, you can even stay the night in a floating bungalow – a favourite with honeymooners.

One of the most sought after experiences on any visit to Thailand is of course to meet an Asian elephant. The wild Khao Sok elephants are notoriously elusive, however you can guarantee an encounter on

any of the recommended tours 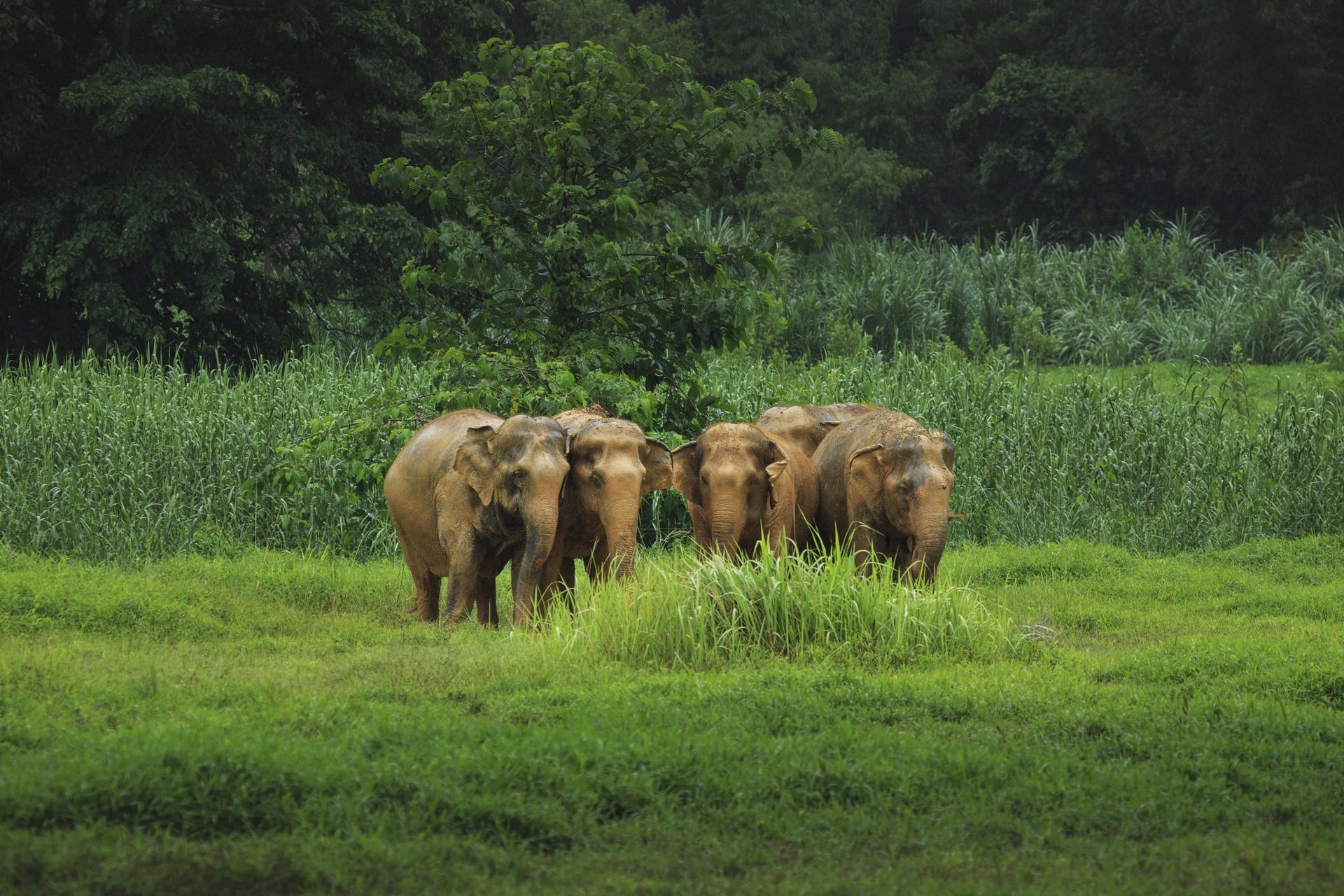 There are thought to be around 6,000 elephants in Thailand, 50% of which are wild and the remaining 50% domesticated. Khao Sok National Park is home to around 200 of these wild elephants which roam free in the rainforest. Through the use of monitoring equipment in the form of forest cameras, we are able to keep track of the elephants and learn more about them. 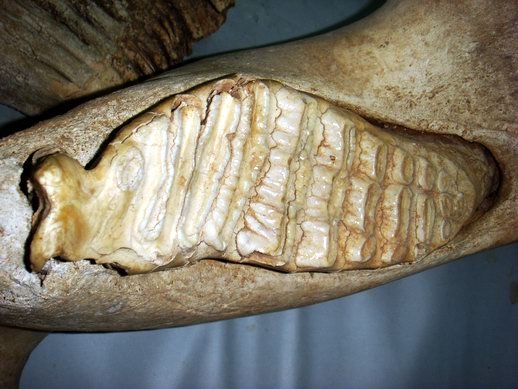 If the thought of meeting one of these fantastic pachyderms is enough to make you book a flight to Thailand, you want to be guaranteed an opportunity to meet one. While we don’t recommend taking part in elephant rides, there are plenty more ethical ways to make your dreams a reality.

Elephant Hills is a Khao Sok based tour operator who offer recommend tours for guests visiting the park. Included on each of their tours is a visit to a private award-winning elephant camp – a one of a kind destination where the resident elephants roam in a completely chain-free park. 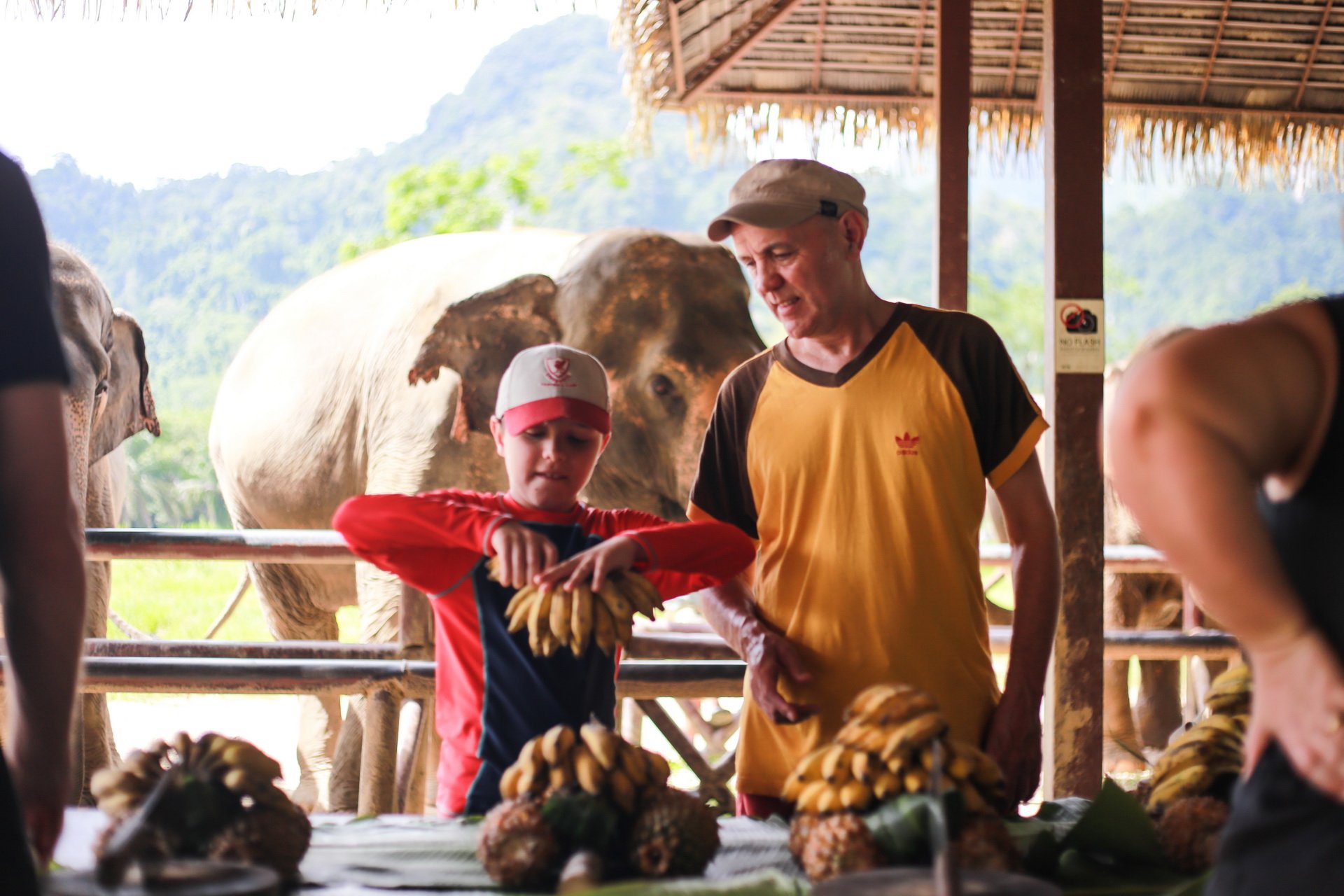 prepare food for the elephants before hand-feeding them

Guests visit in a small group and will prepare lunch for the elephants before hand-feeding them. An experience not to be missed!

Getting to Khao Sok

Our location in Southern Thailand is ideally placed for combining with a wider Thailand itinerary. Perhaps explore the coastal destinations of Koh Samui Phuket, or join us after a visit to the capital. Whatever your plans for your Thailand holiday, getting to Khao Sok National Park couldn’t be easier. 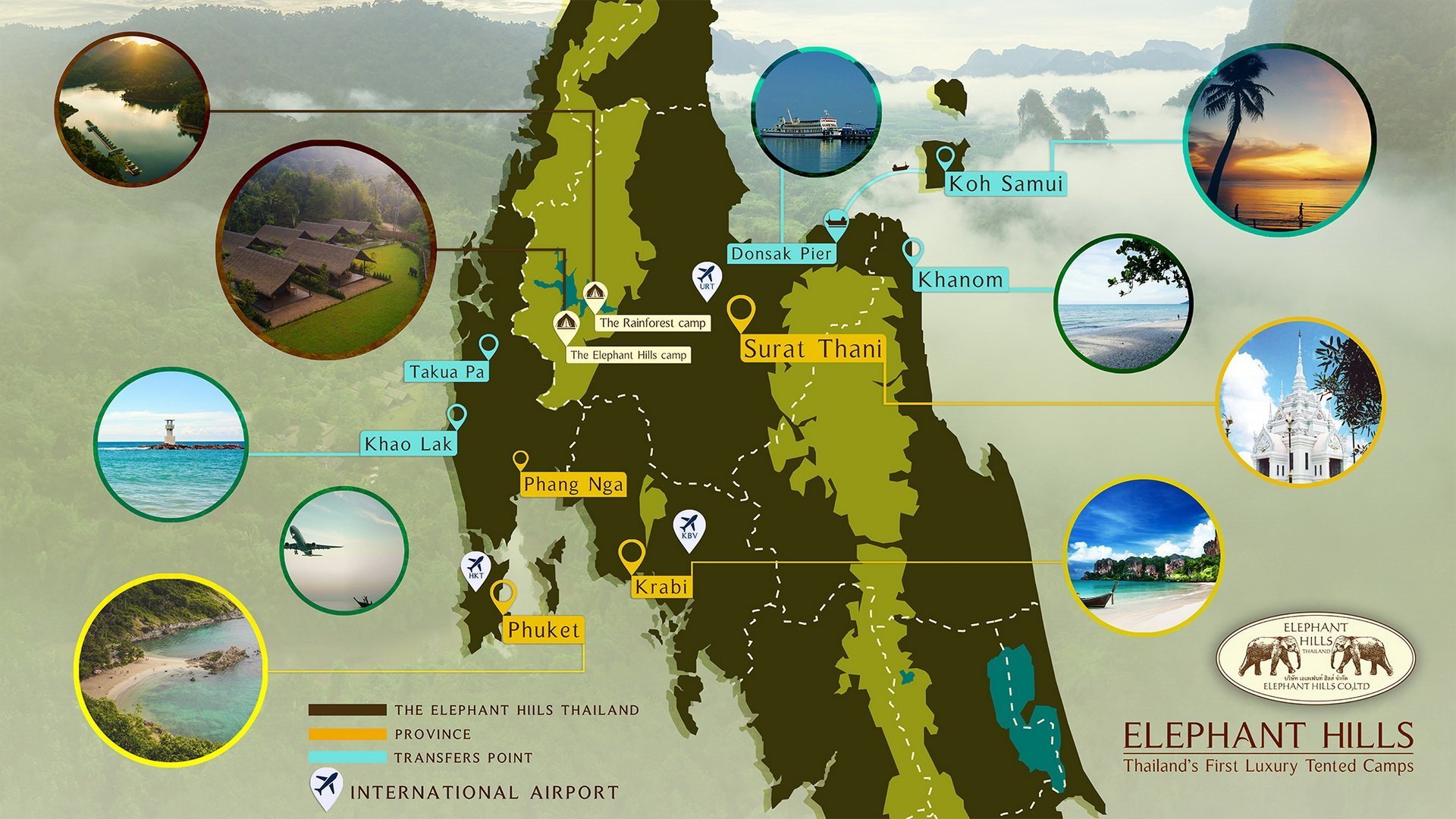 All of the transfers will be included in all tour packages

All the recommended tours on our website include transfers from Southern Thailand’s major hubs, including airports, ports and tourist destinations. What’s more, the return transfers can be mixed and matched, so you can be collected from one side of the island and delivered to another after your tour.

Who Should Visit Khao Sok? 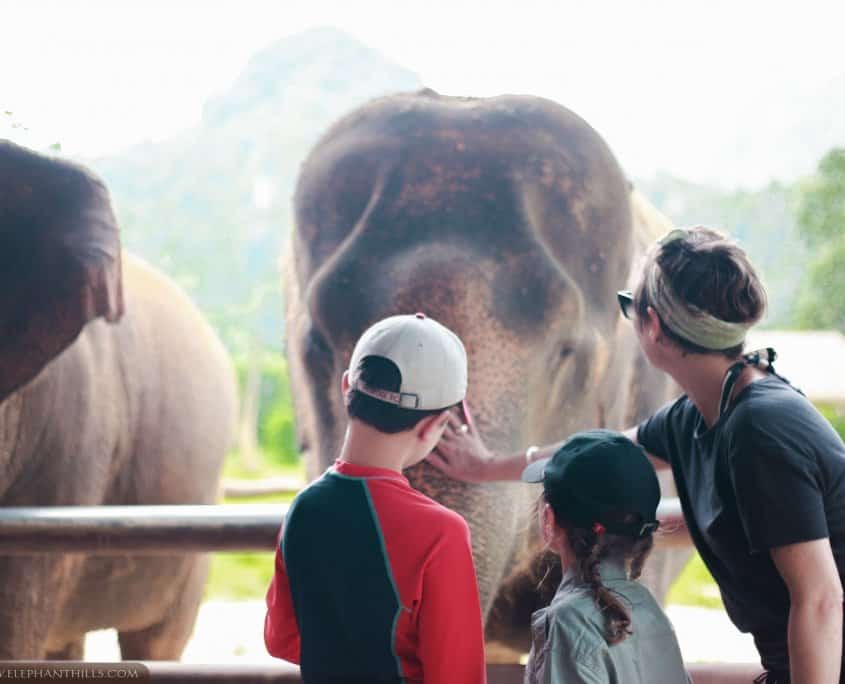 Everyone! Providing that you want to make a day trip and remain around the visitors centre, people of all abilities including small children and the elderly are able to enjoy Khao Sok National Park.

If you wish to explore further into the rainforest, trek, or take part in one of the recommended tours, it’s suggested that you be of moderate physical ability. The minimum ages on these tours is 4 years old.