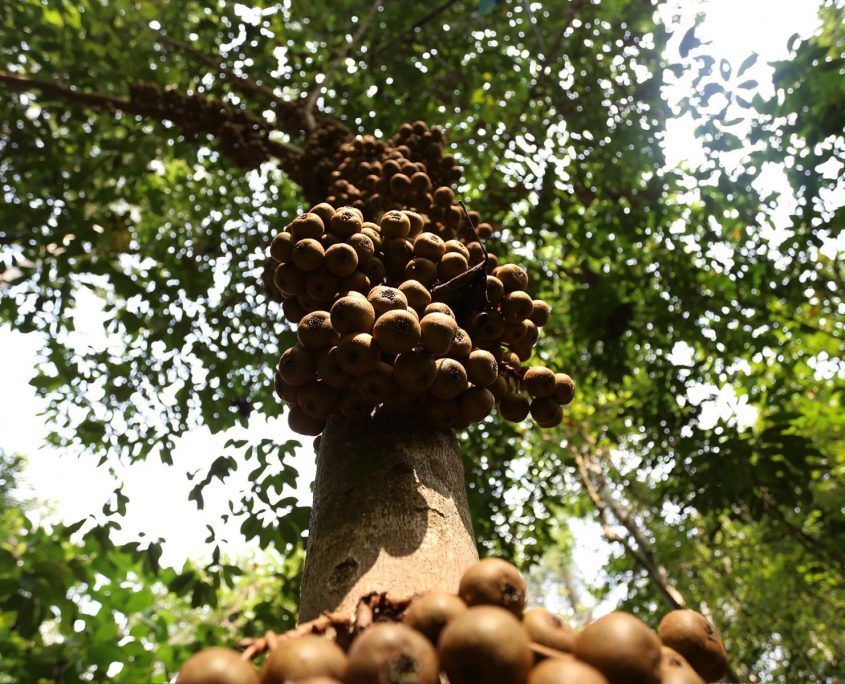 Description:
There are about 800 species of fig in the world, a majority of which can be found in the Indo­ Australian region. Although colloquially called ‘fig tree’, not all species are actually trees – some are vines or epiphytes instead. Figs are often considered key stone species, since they provide an important food resource for many animals and birds in the forest. The fig has a truly unique pollination process involving highly specialized wasps. These wasps bore into the center of the still green, unripe fruit of the fig tree, which are technically not fruits, but flowers. The wasps use the fruit as a place to lay and germinate their eggs facilitating pollination of the fig tree. Losing their wings when entering the fruit and being unable to leave the fruit after eggs have been laid means that the wasp will die inside the fruit. The eggs hatchwith half of them resulting in male wasps and the other half in female wasps. Eventually these wasps mate, the males drill a tunnel out of the fig and die so the females can leave the fig and fly to the next fig tree, starting the cycle all over again. The bodies of the dead wasps dissolve inside the fig resulting in protein. Yellow, red and orange ripe figs are one of the most important food sources in the rainforest. Hornbills, gibbons, deer, monkeys, tapirs, bears, and squirrels are only some of the species that feed on them.

… that the oldest known living plant in the world is a fig tree? It is of the species Ficus religiosa, was planted in 288 BC in Sri Lanka, and is still surviving today!

Strangler figs are epiphytes, requiring a host tree to grow on. These figs, which also include the famous Banyan trees, most often found in mangrove environments, show how fierce the fight for sunlight in the rainforest can be. Strangler figs begin their life as seeds, being carried to the top of another tree in the stomach of a bird or an animal. The seed is deposited inside a bolus of nutrient rich feces and begins to develop roots and shoots. The root system coils around the host trunk, searching for the soil, whilst the shoots grow up into the host’s canopy. They grow extremely fast, soon crowding out both roots and shoots of the host tree. Having reached the soil, strangler figs steal away nutrients and water from their host tree’s soil, while at the same time squeezing tight around its trunk, making it impossible for the host tree to pump up nutrients and water from the soil to the canopy. This eventually results in the death of the host tree. The host tree decomposes over the course of decades, leaving the strangler fig to grow alone. The resulting hollow trunks make great hiding and nesting places for the animals in the forest.

Stem Figs:
Stemmed figs don’t require host trees to grow as they develop their own trunk. This means that they are not epiphytes, but real trees, propagating from seeds deposited on the ground. There are some species especially noticeable in Thailand: Ficus benjamina, or Weeping fig, is the official tree of Bangkok. It grows to heights of about 30m and has very light­sensitive leaves. When light levels change this fig tree will drop its leaves and grow new ones to adjust to light fluctuations. Another important fig tree is Ficus religiosa, or sacred fig, which has heart­shaped leaves. This species is considered to be holy by Buddhists, since it was under a Ficus religiosa that Lord Buddha received his enlightenment. A Buddhist will never cut down a Ficus religiosa unless absolutely necessary. If so, a religious ceremony by Buddhist monks will have to take place before the tree can be cut down. 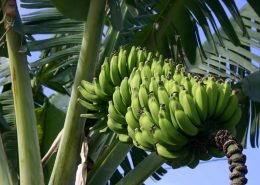 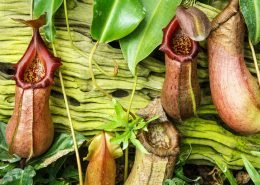 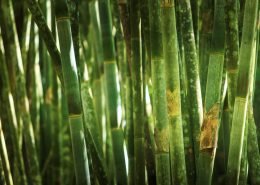 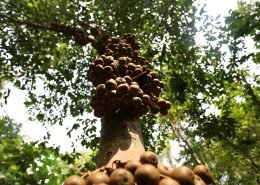 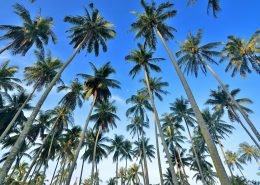