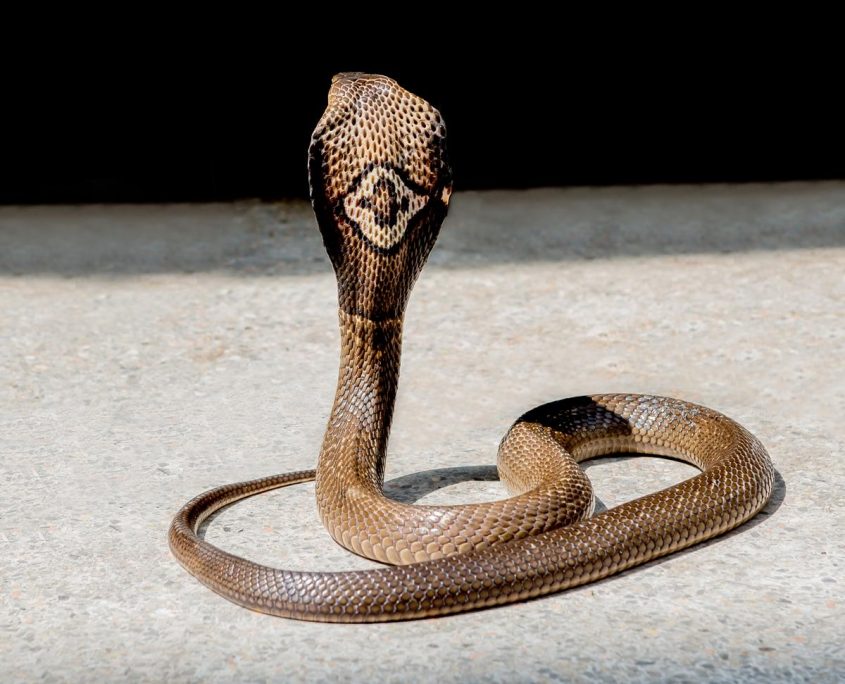 The cobra family represents over 270 species of elapid snakes, most of which fall under the Naja genus. All known Naja cobras are poisonous, are capable of “standing” upwards and will create a hood when threatened, giving them their distinctive shape. 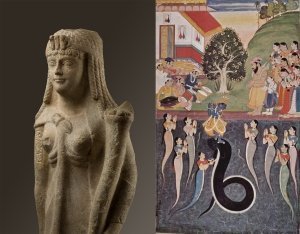 Cobras have held an important place historically, throughout Asia and Africa, but particularly in India and Egypt. In Hinduism, the god Shiva is pictured meditating with a cobra around his neck, while Vishnu is often depicted creating the universe, resting atop a cobra. As a sign of royalty, a cobra was often sculpted into the headdress of Egyptian royalty, such as that worn by Queen Cleopatra.

The monocled cobra was first recorded by a Western naturalist in 1831, Monsieur René Lesson. In the years that followed, further discoveries of Naja kaouthia which presented with different colourings were misreported as subspecies under a variety of names. Today, we recognise Naja kaouthia as a singular species of cobra which can vary in colouration dependent largely on its habitat. 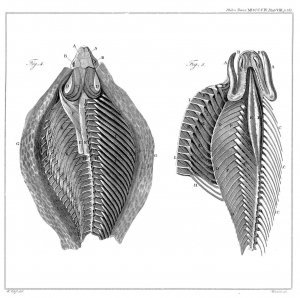 The monocled cobra is identified by the circular marking on the back of its hood, though it is often confused with the spectacled cobra, which has a distinctive double circle marking. As a highly poisonous snake with a short temper, we don’t recommend getting up close to ascertain which is which!

Due to their adaptation to various habitats across Asia, the general appearance of the monocled cobra can vary. The dorsal scales along the snakes back can range from yellow or grey to brown and even black, and may or may not have bands running across it. The belly of the monocled cobra is generally the same colour as its back, only a lighter shade. Older snakes tend to be paler in colour.

The distinctive cobra hood is created by elongated nuchal ribs, which can expand the neck on demand. The monocled cobra also has a pair of fixed anterior fangs, from which they pump venom into their prey.

Unlike many of the other snakes found in Khao Sok, such as the reticulated python and mangrove pit viper, the cobra has round eyes with round pupils. While it was once thought that pupil shape was linked to whether a snake was venomous, this has clearly been disproven. Scientists now believe that pupil shape is linked to hunting style, with snakes that prefer to ambush their prey (the “sit and wait” method) having elliptical pupils to better judge striking distance, and those who forage their prey (the “search and pursue” method) having round pupils.

Monocled cobras are very fast-moving and are defensive by nature. Should they feel threatened, they rear up and spread their hood, then will strike suddenly before making a hasty escape. This, combined with their natural habitat of living in rural areas, makes them a threat to humans.

In terms of at-risk animals, the monocled cobra is classified on the IUCN Red List as ‘least concern’, meaning that it is not currently an at-risk animal.

…that the monocled cobra is responsible for the highest fatality rate of snake venom poisoning in Thailand?

With one of the widest ranges amongst species of cobra, the monocled cobra is found throughout a large region of Asia. There have been recordings as far west as central India, and as far east as Vietnam. The cobra is also distributed within China, Bangladesh, Cambodia, Laos, Bhutan, Myanmar, Nepal, the Malay Peninsula, and of course, Thailand.

Within Thailand, the majority of sightings are located in the central and southern parts of the country.

The monocled cobra is a formidable predator, fast-moving and with an insatiable appetite. It is most active at dusk when the forest floor is a veritable buffet of small animals. While the cobra has a preference for small rodents such as the lesser bamboo rat, it will also happily feast on reptiles and amphibians, including lizards, frogs, toads, turtles and even smaller snakes. 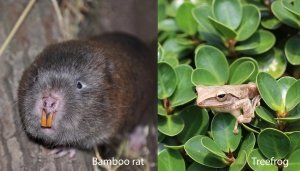 With such varied wildlife in Khao Sok National Park, the monocled cobra has no shortage of dining options.

Due to their fondness for small mammals, monocled cobras are generally found in areas that are attractive to rodents, such as agricultural areas and forests with plenty of vegetation. This species of cobra is very adaptable though, and as it disperses over new habitats has also become suited to habitats including grasslands, mangroves and swamps.

The period between copulation and laying of eggs in monocled cobras takes around 60 days. Female cobras will generally lay 16-33 eggs in a clutch, but have been known to lay as many as 45! The clutch is burrowed in soil and coiled around by the female of the species. After about 60 days the eggs will hatch, resulting in miniature cobra hatchlings with fully functional venom glands. The hatchlings’ stomachs contain a yolk sac which keeps them nourished for the first two weeks, after which they will begin to hunt for prey.

With its powerful venom as a means of both attack and defence, it’s no surprise that the monocled cobra doesn’t have many predators lining up to try their luck. The mongoose is particularly adept at hunting cobras thanks to acetylcholine receptors which protect it from the venom. There are also large birds of prey which hunt cobra, such as the aptly named crested serpent eagle. Finally, the monocled cobra is also preyed upon by the king cobra. Being ophiophagus (snake-eating), and the largest venomous snake in the world, the king cobra is a perilous foe.

While some varieties of cobra spit, or squirt, venom, the monocled cobra has not been found to attack in this way. Instead, the venom is delivered through a pair of anterior fangs. The major toxin found in the venom of a monocled cobra is the postsynaptic neurotoxin α-cobratoxin, which can interfere with nerve transmission. This can lead to necrosis, paralysis and ultimately, if not treated, to respiratory failure or cardiac arrest.

While we know that monocled cobras live within Khao Sok National Park, they avoid areas of human population. The likelihood therefore of encountering a monocled cobra during your time in the rainforest in low. However, as in any jungle setting, we suggest staying vigilant when exploring areas of forest and ensuring that you stick to the designated paths.

Thanks to our commitment to guest safety and our knowledgeable local guides, we have never had a snake injury on our tours. With your observance to our safety procedures, we can ensure that this remains the case.

For the intrepid adventure of a lifetime, visit us at Khao Sok National Park on one of our recommended tours.

And to stay abreast of the latest from Khao Sok’s animal inhabitants, make sure to receive updates by signing up for our newsletter below. 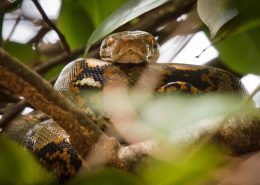 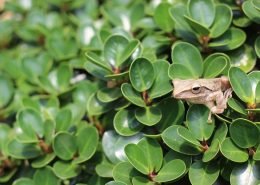 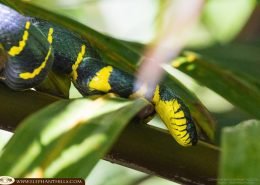